give
Refined By Fire

oahuchurch · Refined By Fire - Episode 1 | Jackson Cheng
Jackson has a talk story time with his son Samuel about Spiritual Blindness, the first episode in our Refined By Fire series.

Jackson: We have a special guest with us for the podcast. And it's my son Samuel. He is 15 and a half years old. And he got a chance to listen to the podcast and we thought, hey, let's have a little discussion about it. So, Sam, what stuck with you the most from this story about the blind man?

Samuel: I think the thing that really stuck with me here is that the man's parents weren't really happy for him of his miracle.

Jackson: Yeah, they seem kind of subdued. Right. Why do you think they were like that?

Samuel: They were, at the time scared of the Pharisees that were there that they could get kicked out of the synagogue.

Jackson: Yeah, right. I mean, they were thinking more about themselves rather than I mean, you would think they would be like, wow, you know, our son. He was born blind and and what an incredible miracle you would think that they'd be overjoyed. I mean, we don't know how old this this guy was. But certainly, you would've thought that his parents would have been really, really happy. So how do you think he felt about his parents' response?

Samuel: Well, I think at the time, he was probably happy that he got his eyesight back. But later, I think it would have kicked in that what his parents had had done. And so you'd be a little bit more angry.

Jackson: Mmm. Yeah. Have you ever felt like that from us? Because I think, you know, probably for him, he felt disappointed right? At his parents' response, that they weren't as loving and they were more thinking about themselves. But have you ever felt that from me or mom?

Jackson: Definitely? What? I thought you're gonna say no never you guys are perfect parents. And he talks about how the blind will see and how those who see you know are blind. What do you think about that? Like what do you think Jesus is?

Samuel: I mean to be honest I it's all really confusing to me because I get like that there weren't like physically blind but like spiritually blind I'm not really sure like what that means. Can you please tell me?

Jackson: Okay, um so spiritual blindness. Yeah, I mean it's it's kind of like going back and and looking at the different people around this event. Right you had...you had the disciples, Jesus' disciples, right. And what what were they kind of caught up with?

Samuel: The question about whether the man sinned or his parents sinned.

Jackson: Yeah, so they were stuck on this theological debate, right? Whose fault is it that this man is born blind and get? So basically all these different people who were obviously not blind physically had a hard time really seeing Jesus for who he was, and really seeing the miracle that just happened right in front of their eyes. And that's why Jesus is saying, Hey, you know, yeah, you claim that you can see, but really, you're blind. And the only person who saw things clearly at the very end and said, Hey, I want to believe is the guy who was born blind? Right. So does that make sense? That whole spiritual blindness right? So obviously, there is a message that God is communicating with us. There's a lesson that God wants us to learn. So, what do you think? What's something that you feel like you will change from this lesson about the blind men?

Jackson: From this specific event recorded in the Bible? Like what do you think is the message that God is wanting for you to take away from?

Samuel: I think for me, the message is like, ignore your distractions in life.

Jackson: Mm hmm. Yeah. To to basically deal with the things that keep us from seeing things clearly. Right. So, distractions obviously is is something. What are distractions in your life?

Samuel: Some of the major ones are for me are school and homework.

Samuel: Sports when they're in season and are more my electronics.

Jackson: Mm hmm. Yeah. So what do you think you can change?

Samuel: I'm not sure what what changes could I make that would help me to open my spiritual eyes?

Jackson: Well, I mean, so when you look at, you know, obviously school, it's not like you can skip school or not do homework, right? Or, you know, when sports come around, it's not like you can bail out on on your practices and games and stuff. But I think Electronics is an area where you can go Okay, you know, maybe that's something that I can cut down a little bit and make more time for God. And for the Bible. So a lot of is like prioritizing things in life. And part of is adding more of the things that will help you to be more spiritual so that you can see God, the Bible, and Jesus more clearly. So what do you think about that?

Samuel: Because now I know like what I need to do, it's just that I have to have like the willpower to do it.

Jackson: Yeah, absolutely. And I think that is the message that God is sending to you. I think for each one of us is something different, right? I think for me, too. I think electronics can be a distraction in my life that, you know, takes away time from from really me focusing on God and being spiritual. I think another thing for me is not to get so wrapped up in life and the buisiness of life that I miss on being compassionate to the people around me. So I think those are different things in that I can walk away this as a lesson for me and something that I can change from this lesson that we just went through about the blind man. So thank you, Samuel, for joining us. And thank you for listening to this podcast and having a time to interact and answer some questions. I hope this was helpful for everybody. And thank you again, everybody for joining us. Our next time we're going to jump into Peter and his life and see how this whole principle of spiritual blindness plays in his life. Again, thank you for joining us and have a wonderful day. 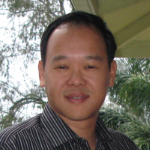 Disciple in the church for over 28 years. Married to an awesome wife and raising two teenagers and one poi dog (who is more obedient than the kids!). I was inspired to do this podcast series to bring a little more dose of Bible and faith into all of our lives, especially during these uncertain times.

Want to visit us?

you are welcome here

See where we are this Sunday.

Our vision is to love God and live like Jesus. Our mission is to go and make disciples of Christ.

Carefully crafted by The Creative Co.